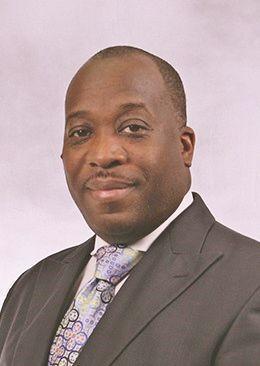 'You name it, I've experienced it': Urbana High's new diversity officer draws upon past projects

URBANA — What kind of experience prepares you to become an officer of diversity, equity and inclusion?

At a glance, Brandon Caffey, assistant principal at Normal West High School, appears to have the résumé.

His efforts have won him Peoria school district's Principal of Year award, the town of Normal’s Martin Luther King Jr. Human Relations Award, the Alton High School Distinguished Alumni award and Alpha Phi Alpha Fraternity’s Brother of the Year — and now, a new position in the Urbana school district. Caffey started his role as Urbana’s brand-new diversity officer Monday. His history of student advocacy landed him the new job with the district after three rounds of interviews.

“These specific positions are becoming more common in education in terms of diversity, equity and inclusion,” Caffey said. “I’ll be thinking of how I give voice and vision and hope to all students, but especially students who have been traditionally marginalized or underrepresented.”

After graduating with his master’s in educational administration in 2002 from Illinois State, Caffey began teaching in the culturally rich schools of the Peoria school district.

“One school in particular had students that spoke over 20 different languages,” he said. “I’ve been exposed to a lot of different backgrounds, religious beliefs, sexual orientations: you name it, I’ve experienced it.”

In 2005, he began his roles as an administrator, serving as principal of Peoria’s Greeley School until 2011 and assistant principal of Richwoods High School in 2015.

His 2015 transition to Normal West is where his two flagship in-school diversity initiatives came about.

Both arose from conversations with Black female students who felt the African American voices at the school weren’t being heard.

After some end-of-year celebrations, Caffey said he was approached by a young woman who felt that African American students weren’t being recognized, despite their best efforts to get good grades and participate in different school activities.

“When it came to giving out awards, they felt African American students were often being overlooked,” he said.

Next, when Normal West’s sole Black representative of student council was voted off, Caffey intervened.

“I had to fight for her to get back on because we wanted students of different ethnicities to be represented on student council,” Caffey said.

The occurrence led to the formation of Normal West’s Black Student Union, open to students of all ethnicities, to represent kids who felt disengaged from the school community because of their race.

All the while, Caffey organized the annual “Rite of Passage: Father and Son Breakfast” for families in Normal and Bloomington, which began in 2013 through his Alpha Phi Alpha fraternity.

“We speak about the issues of manhood and what that looks like for our community,” he said. “How can we promote what manly deeds represent, not only as young men but how do we protect our women, our mothers, so we can have a stronger community?”

‘Open arms’ Caffey’s always been fond of Champaign-Urbana, but he’s about to get a whole lot more familiar.

He traveled down to Urbana from Bloomington plenty of times during his days as a student at Illinois State.

In fact, relatives and coworkers in the C-U area — like Caffey’s cousin, James Carter, of the UI police department — alerted Caffey of the opening in the Urbana district.

“The folks at Urbana School District 116, I call them my family,” Caffey said. “I’ve been welcomed with open arms. They’ve spoken nothing but great things about the community.”

Caffey’s winding journey started in his home at Alton, where his family of educators first rubbed off. It began with his mother, who taught English for 35 years.

“The seed was planted in me early to potentially go in that field,” he said.

Outside of the classroom, Caffey is a bit of a renaissance man. He travels plenty with his wife and three kids. He DJs and produces music around the Normal community with playlists heavy on R&B, hip-hop and house tracks.

“My go-to move, at my size and my weight, is probably a good post-up on the block,” he said.

Some early items in the agenda: getting to know the teachers and families through the district while identifying areas to help close the achievement and opportunity gaps.

“I’ll be working in those spaces so all students have equal access to the best education we can provide them,” Caffey said.